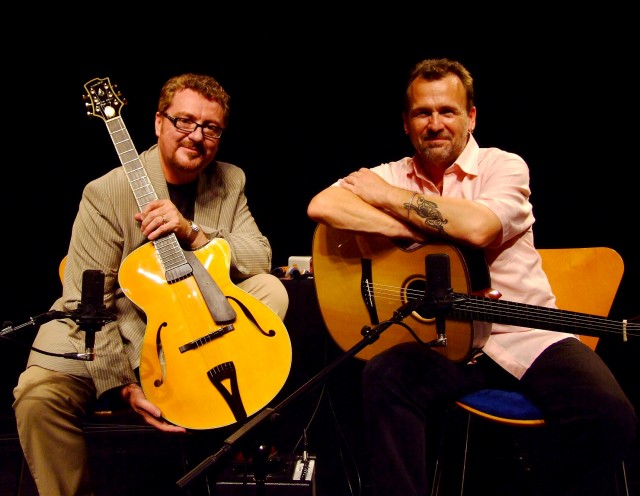 Award winning Jazz guitarist MARTIN TAYLOR teams up with acoustic and slide guitar virtuoso MARTIN SIMPSON. The pair shares the stage throughout the performance – adding to each other’s songs and instrumental pieces, taking them to sublime new heights.

Martin Taylor was name-checked on BBC Radio 2’s Breakfast Show as being considered THE best guitarist by no less than Jeff Beck – leading to a live session on the show the next morning. Although completely self taught, he has enjoyed a remarkable musical career spanning across four decades and during that time has invented and developed a way of playing the guitar that is admired, and often imitated, by guitarists all over the world. As well as being a true guitar innovator, he is also a master concert performer, dazzling audiences with his solo shows, which combine virtuosity, emotion and humour, with a strong stage presence. He spends much of the year travelling the world, playing in concert halls in Europe, North America, Japan, Asia, and Australasia. As well as his solo concerts and recordings, he has also collaborated with musicians from many different musical genre including, Stephane Grappelli, Chet Atkins, Eric Clapton, Bill Wyman, George Harrison, Dionne Warwick, Bryn Terfel and Jamie Cullum. In 2002,he was appointed MBE “For Services To Jazz Music”, in The Queen’s Birthday Honours List, which he received personally from Her Majesty The Queen at an investiture at Buckingham Palace.

There is no doubt that after 35 years as a professional musician Martin Simpson is, right now, better than ever. Widely acknowledged as one of the finest acoustic and slide guitar players in the world, his interpretations of traditional songs are masterpieces of storytelling. His solo shows are intense, eclectic, spellbinding and deeply moving. Martin has been nominated an astounding 23 times in the eleven years of the BBC Radio 2 Folk Awards – more than any other performer – with 9 consecutive years as nominee for Musician of The Year, which he has won twice. 2008 saw an incredible 5 nominations for “Prodigal Son’ and 2 wins, whilst in 2010 he had an unprecedented 6 nominations for his CD, “True Stories” and a win for Best Traditional Track, “Sir Patrick Spens”. Whether playing American old-time music, blues, a Dylan song or his own material, Martin Simpson is unpredictable, individual and a guitarist of immense subtlety

This is an unmissable evening with two guitar playing legends working in harmony.

“Martin Taylor is one of the most awesome solo guitar players in the history of the instrument. He’s unbelievable” Pat Metheny