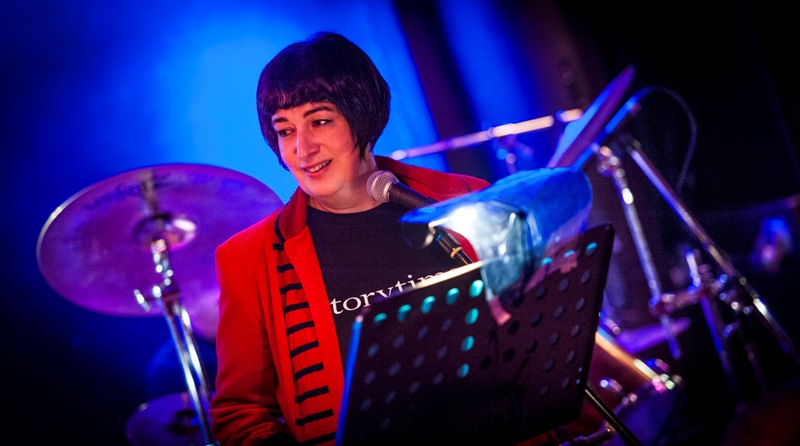 Joanne Harris (MBE) was born in Barnsley in 1964, of a French mother and an English father. She studied Modern and Mediaeval Languages at Cambridge and was a teacher for fifteen years, during which time she published three novels, including Chocolat (1999), which was made into an Oscar-nominated film starring Juliette Binoche and Johnny Depp.

Since then, she has written 15 more novels, two collections of short stories, a Dr Who novella, guest episodes for the game Zombies, Run and three cookbooks. Her books are now published in over 50 countries and have won a number of British and international awards. She is an honorary Fellow of St Catharine’s College, Cambridge, has honorary doctorates in literature from the universities of Sheffield and Huddersfield, and has been a judge for the Whitbread Prize, the Orange Prize, the Desmond Elliott Prize and the Royal Society Winton Prize for Science.

She works from a shed in her garden, plays bass in the band she first joined when she was 16, is currently writing a screenplay and lives with her husband and daughter in a little wood in Yorkshire.

Joanne Harris and the #Storytime Band

There is a story the bees used to tell, which makes it hard to disbelieve….

Joanne Harris is the internationally acclaimed author of CHOCOLAT (the award-winning novel and Hollywood film), and many other best-selling novels, including THE GOSPEL OF LOKI, RUNEMARKS and RUNELIGHT. Her career also includes writing for TV, opera and musical theatre, and her work has been published in over 50 countries. She is also active on Twitter, where her live storytelling has become a popular phenomenon. From these stories, written from scratch in front of a Twitter audience, and sent out into the Twittersphere in segments of 140 characters, a whole book of stories has emerged – thought-provoking, funny, sad and completely original.

HONEYCOMB, an illustrated collection of 100 dark and interconnected tales, will be published by Gollancz in the autumn of 2019. Meanwhile, Joanne and the Storytime Band have created #Storytime: a live show featuring tales from the book, plus image projections and music, as well as longer pieces based on her 2017 novella A POCKETFUL OF CROWS, and her new 2018 novella THE BLUE SALT ROAD.

This show (which premiered in 2016 in London’s King’s Place as part of the Tête-à-Tête festival) is intimate, engaging, quirky and darkly magical, appealing to audiences of all ages, but especially lovers of folklore, fantasy and fairytale.

“Joanne Harris’ #storytime on Twitter always offers an oasis of magic online (and sometimes some trenchant allegory). Storytime Live carefully builds on the framework of the tales, bringing the band she’s been part of since her teenage years to perform at venues and festivals around the country. But the live version isn’t simply story with music tacked-on – something that’s been part of storytelling for centuries – but a completely fresh, integrated whole that merges story, music and song into a new whole. A desert dweller who dreams of the sea, a jellyfish queen who falls in love with the moon, a woman who finds…well, listen and discover for yourselves, sink into its spell. The songs offer both climax and counterpoint to the story, a different view that offers gentle illumination. The music is lushly rich, no matter whether it’s filigree and decoration for the telling or blossoming into majesty in a soft, winding twirl the surrounds and lifts the songs. Although the stories are new, they carry the patina of age in their ideas and style: timeless and wise in the way of a traditional teller, and the production gives everything a stunning, natural intimacy. Harris and the musicians have created something wonderfully fresh that’s also deliciously deep and compassionate, a very rare combination; not only enjoyable but thought-provoking, too. It’s magic you can take with you. (Chris Nickson)