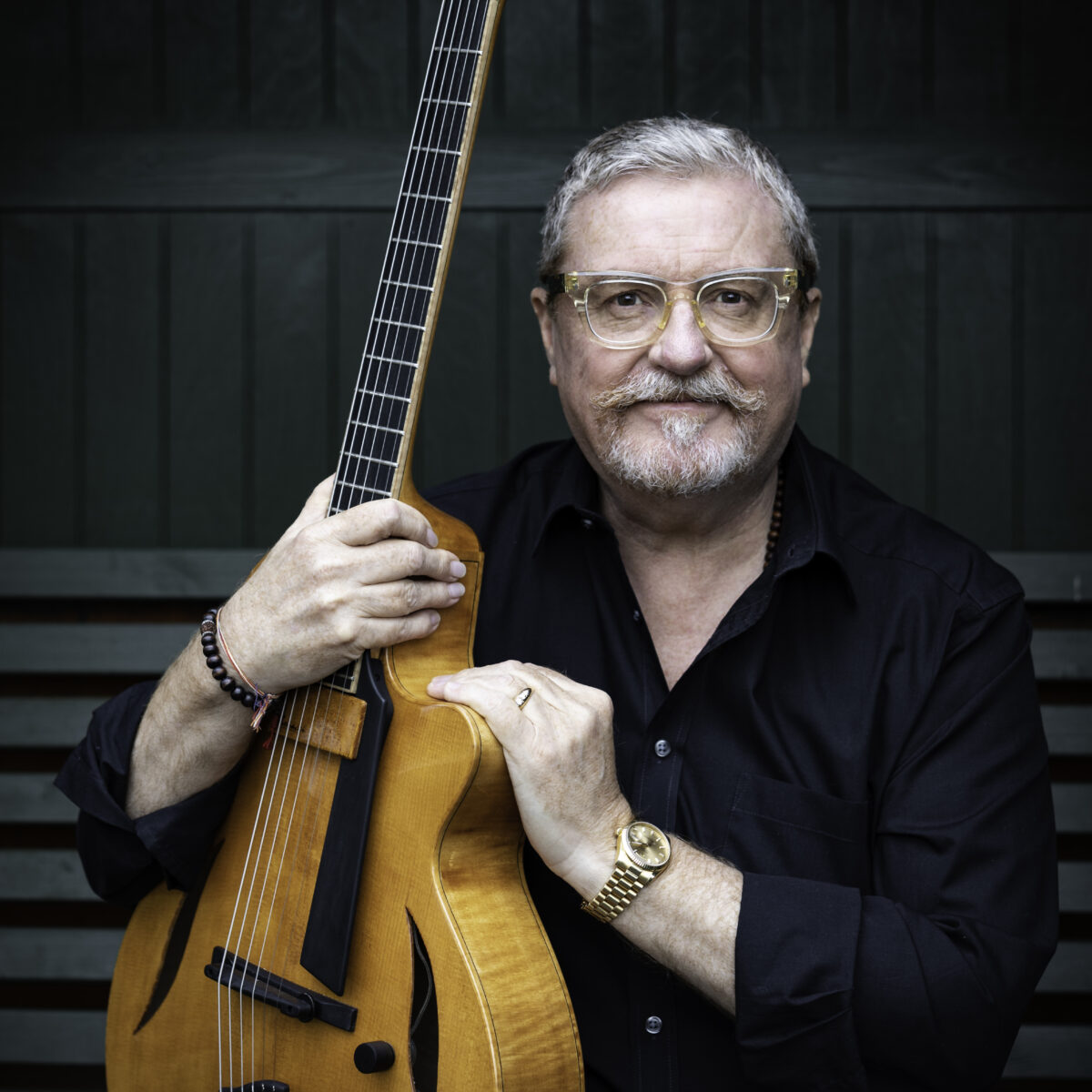 “Taylor is the finest British guitarist of his generation.” The Times

Multi award winning guitarist and composer MARTIN TAYLOR has established a unique musical career as an internationally acclaimed musician, and his inimitable style has seen him recognized as the world’s foremost exponent of solo jazz guitar playing.

Completely self taught, he has enjoyed a remarkable musical career spanning across five decades, and during that time has invented and developed a way of playing the guitar that is admired, and often imitated, by guitarists all over the world. As well as being a true guitar innovator, he is also a master concert performer, dazzling audiences with his solo shows, which combine virtuosity, emotion, humour, with a strong stage presence.

He spends much of the year travelling the world, playing in concert halls in Europe, North America, Japan, Asia, and Australasia as well as presiding over the uniquely innovative Martin Taylor Guitar Academy Online.

From 1979 to 1990 he toured the world and recorded over 20 albums with the French jazz violin legend STEPHANE GRAPPELLI. Their album with Vassar Clements “Together At Last” won a Grammy Nomination in 1987. Monsieur Grappelli described him as “A great artist, rich in talent and elegance”.

His ground breaking solo album ARTISTRY, produced by Steve Howe, was released in 1992 to much critical acclaim. It was No 1 in the HMV Jazz Charts for a record 12 weeks and launched his career as an international solo artist.

After two very successful albums for Sony/Columbia, KISS AND TELL and NITELIFE, he went on to record several albums for The Guitar Label.

In 1999 he was made an Honorary Doctor of the University of The West of Scotland and in 2002, was appointed MBE “For Services to Jazz Music”, in The Queen’s Birthday Honours List, which he received personally from Her Majesty The Queen at an investiture at Buckingham Palace.

In 2007 he received the prestigious BBC Radio 2 “Heart of Jazz” Award in recognition of his career in music, was presented with a Lifetime Achievement Award from the North Wales Jazz Guitar Festival for his “Contribution to Jazz Guitar Worldwide”.

He has also received a record 14 British Jazz Awards as a guitarist, and as a composer he was nominated for “Best Contemporary Song” in the BBC Folk Awards in 2009. The prestigious Royal Scottish Academy of Music and Drama made him an Honorary Doctor of Music in 2010.

2010 saw the launch of the uniquely innovative Martin Taylor Guitar Academy online.  As one of the world’s most recognized online guitar teachers his innovative online guitar school with its headquarters in Napa, CA has been featured on NPR, BBC, Fox News and the LA Times and is subscribed to by guitarists in over 58 countries.

“Martin Taylor is one of the most awesome solo guitar players in the history of the instrument.” Pat Metheny

“He out-shreds all of us put together….I’ve never seen anything like it.”  Jeff Beck

“The man is no less than a guitar genius.” Martin Bashir, MSNBC

“There is a touch of genius in his playing.” Classical Guitar Magazine

“No matter how complex or daring, Taylor’s interpretations never short change the melodies; indeed, his remarkable fluid touch imbues a seamless beauty. Martin Taylor is something to behold.” The Washington Post

“Martin Taylor is one of the greatest and most impressive guitar players in the world.” Chet Atkins